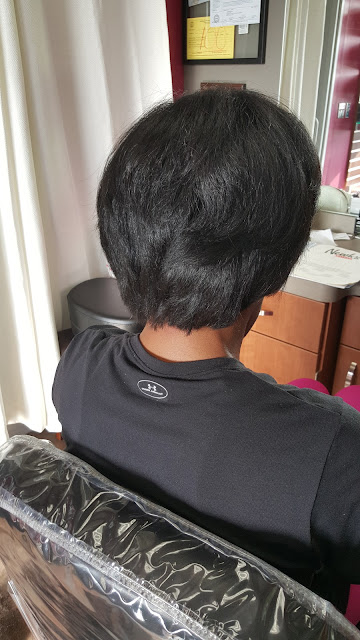 Myth #1.  Natural hair is easier-  I think this is the most common misconception about having natural hair.  Very few women that have natural hair are able to just wake up and go.  Most women have to do something to their natural hair to get it to look how they want.  This can include twisting or rolling it, adding product, or making sure it has enough moisture.  This often has to be done if not on a daily basis, multiple times per week.  A lot of times women find that the upkeep of th
eir natural hair is much harder and requires more work than the upkeep of relaxed hair.  The client in this post often found that majority of the time she simply wore a ponytail puff because she did not have time to do a lot to her hair.  Even though she has a ton of hair she was not satisfied with the look of a "wash and go" with her hair texture.  She came in the salon to cut most of her hair off and to get a silk press. 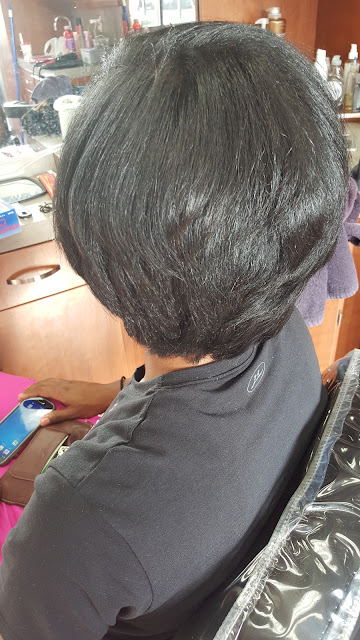 Myth #2.  You don't have to get your ends trimmed as often-  Wrong, wrong, WRONG!  This statement could not be more false.  I can't tell you the number of natural women that come to me saying that they haven't had a trim in over a year.  This is way too long.  Even if your hair is natural it still has the ability to split.  In fact natural women may be even more prone to split ends because a lot of natural women do not tie their hair up at night.  Relaxed women wrap their hair at night with a silk scarf which protects the ends of the hair from the friction of rubbing up against the pillow and sheets of your bed (or whatever you sleep on).  It is however, much harder to see split ends in natural hair due to the fact that it is all curly so it all blends in.  But the minute you straighten it or even try to detangle it you can clearly see and/or feel the ends that have split.  Natural women should get their ends trimmed at least every three months.  The client in this pic had not had her ends trimmed in over a year and was looking to get a major cut.  She was tired of the bun every day and was ready to say goodbye to having so much hair on her head. 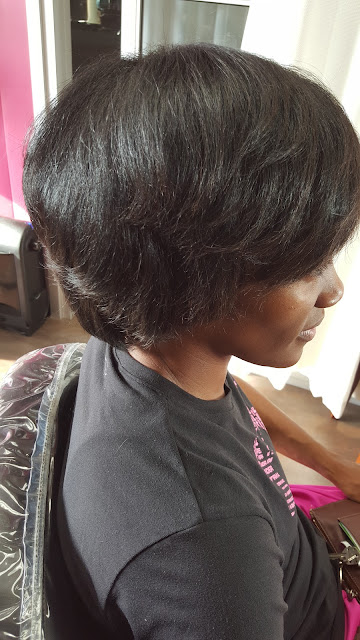 Myth #3.  Natural hair is healthier than relaxed hair-  This is probably the other most common misconception out there.  Many women go natural in the first place because they say that their relaxed hair is so damaged so in order for their hair to be healthy they go natural.  The truth is that you can also have unhealthy natural hair as well.  Some women have damaged relaxed hair due to misusing the relaxer by getting them too often as well as doing them themselves.  Over time, both things can cause significant damage to the hair.  Once you decide to go natural, you are no longer subjecting your hair to over-processing and damage so of course you will see it get healthier.  However, if you stopped over-processing your relaxed hair while still relaxed and started stretching them out instead of dumping them altogether you would still have healthy hair!  Before I trimmed this clients hair, it looked very damaged from having split ends as well as color that had dried out.  Cutting her hair instantly got it looking healthy again.  Stay tuned for more pictures of this client.  She wants to do a rod set on it next time...
Share:
Posted by LaToya Jones at 12:09:00 PM